Posted on October 7, 2017 by coachfordnews

Tribute to angler and friend 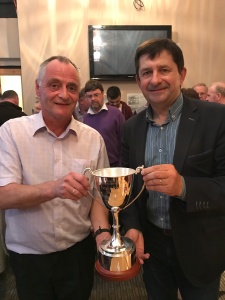 The Coachford & District Trout Anglers Association were presented with a stunning trophy by the Riordan Family of Coachford in honour of their uncle Paddy who was a founding member of the Association and who kept it going single handily for many years. The current chairman of the Association, Cal Healy in accepting the trophy paid tribute to Paddy, “ Paddy was a remarkable man and kept the club going in some lean years and also kept an archive of club photographs, competition entries and other items down through the years. He was one of its founding members in 1949 and continued to be involved for over 60 years. Paddy was responsible for the continued growth of the sport in the area and was a fine angler. Paddy, along with Eugene Hayes organised many competitions down through the years in Killarney and on other rivers and lakes and these attracted many anglers. Paddy was also involved in promoting course fishing on the river Lee in the 70’s and 80’s and ran competitions many years before the river became known to the international angler. Paddy did not spend his time talking about things he just went ahead and did them and that is one of the reason this Association is still thriving today. Paddy was made the Lifelong President of the Association in 2010, a position he held until he sadly passed away in February 2017. We are indebted to him for the many years of work he carried out for the Coachford & District Trout Anglers Association.”  Paddy’s nephew , Michael Riordan presented the trophy to Cal. The handing over of the trophy to the Trout Anglers  was a lovely occasion in O Riordan’s Bar and saw many past and present members talk about the great rivers and lakes they fished with Paddy, look over old photographs and memorabilia, and talked about the huge Trout that got away.

The recent  footpath work in the village by Cork County Council has been welcomed by the Community Council. Chairperson, Maighread  Ní Mhurchu Buachalla said “ We are delighted to see the repairs to the footpath outside O’Callaghan’s. This was a long time coming, nine years in fact but now that’s it done it looks great. The work on the footpath below the GAA pitch was badly needed. This is used by so many people of all ages and had become dangerous as it was the same level as the road in many places.” The Coachford Community Association has made many representations to the council and has met with engineers over the last two years to try and advance these works. Unfortunately the relaying of the footpath by the GAA pitch will not be completed within this year’s budget and will have to be stopped soon and taken up again in 2018. It is hoped the new footpath will encourage more people to take up walking.

Aghabullogue GAA underage head into October with a very busy schedule ahead of them. October was traditionally a month when very few games were played but now has turned into a hectic time for a lot of clubs and especially dual clubs like Aghabullogue. The U12, U14 and U16 Footballers and hurlers are due to play Regional finals and County games over the next four weeks and possibly into November. The clubs underage success is a testament to those involved with these teams but it does bring its own problems. There is tremendous pressure on players and parents as October used to been seen as the months for outdoor athletics, Soccer and School games and they now must contend with a growing and extended GAA season . “ It’s all very well for the GAA to be  playing these games in October  but the conditions are awful, the pitches are heavy and it’s unfair to be asking children to have to play in these rain sodden pitches especially when we had very few games during the summer months”. Meanwhile the adult teams had a hectic weekend playing three matches in two days. For the first time in the club’s history Aghabulloge Intermediate Footballers and hurlers  fielded two separate teams at the same time. On Saturday evening, the footballers played Glanworth and lost by  three points while the hurlers took on Dungourney in Coachford but were well beaten by 13 points. The following morning the footballers were out again and defeated Newmarket to t reach the final of this year’s league and gain promotion to next year’s Division Two.

There was no winner in this week’s Coachford AFC Lotto. The jackpot for next week is a massive €3,800. The draw takes place on Monday night in O’Riordan’s Bar Coachford. The numbers drawn this week were 7, 9 and 24.the lucky dip winners were. €40 Martin Holmes, €20 Mary & Danni, Anna O’Riordan, Lisa McElroy, Trisha & Oisín. .

Griffins annual Charity Cycle takes place on Sunday October 8th. The charity cycle event always draws a huge number of participants to the very picturesque Garden Centre on the banks of the River Lee. This year the proceeds of the cycle will be donated to Cork Simon and One Mans Ethiopia. The event kicks off at 10am.

Community Website to promote Coachford and to let those who are away from home know what is happening in the beautiful village of Coachford.
View all posts by coachfordnews →
This entry was posted in Latest News and tagged ACR Community Council, Coachford, Coachford Community Association, Coachford Village, Cork, Fishing, Lake. Bookmark the permalink.