Posted on April 3, 2015 by coachfordnews 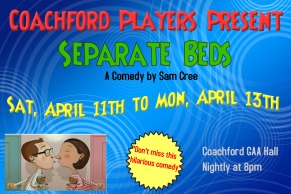 Arthur and Clare Marshall would like to invite you to the wedding of their daughter Judy to Mr. Alan.. Everyone is invited to witness the lead up to the wedding, including how it is taking six weeks to paint one bedroom, a cleaning lady who loves whiskey and Beetroot wine, a very amorous and sexually frustrated neighbour and a wife who insists on her husband and herself sleeping in separate beds. Don’t miss the Coachford Players hilarious comedy, ‘Separate Beds’ Rea on Saturday April 11, Sunday April 12 and Monday April 13m at the GAA Hall Coachford at 8pm each night.

Vintage run in the Lee Valley

Broomhill Vintage Club will hold their annual Vintage Car and Tractor run on Sunday April 12th.  Drivers are invited to register at the GAA hall in Coachford from 11.00am where tea, coffee and scones will be available on registration. The Cars will depart at noon and head west to Gouagane Barra via Toonsbridge, Inchigeela and Ballingeary. The owners will regroup and park up for a short while and return to O’Riordan’s Bar Coachford. The tractors will leave Coachford at 12 and head south for Canovee and enjoy a 20 mile run around the highways and byways of beautiful Canovee, Larchhill and Forrest before returning to Coachford Village for hot food in O’Riordans. Entry is only €20 per vehicle .

Foróige take to the tree tops

Coachford Foróige will try out the brand new Zipit facilities in Farran Woods on Good Friday. Over 30 members and leaders will  use Zip lines to transverse from tree to tree around the forest.  Zipit in Farran Forest Park offers up to 4 hours of tree-top, fun-filled, adventure challenge in a healthy, outdoor setting for adults and children from age 7.  Climb poles and climbing walls, swing into cargo nets, balance on a rope bridge, hurtle down a zip wire, even ride a BMX across a treetop bridge 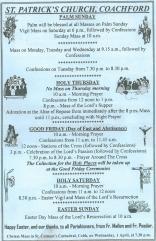 Mass of the Lord’s Supper  takes place at 8pm on Thursday at St. Patrick’s Church, Coachford. Adoration at the altar of Repose takes place immediately after the 8pm mass until 11pm concluding with Night Prayer. Good Friday begins with morning Prayer at 10am. Confessions take place from 11.00am to 1145am. Stations of the Cross begin at noon and these are followed by Confessions. Celebration of the Lord’s Passion is at 3pm and this is followed by Confessions. Prayer Around the Cross  is from 7.30pm to 8.30pm. On Holy Saturday Morning Prayer is at 10am , Confessions take place from 11am to 12 noon and the Easter Vigil and Mass of the Lord’s Resurrection begins at 8.30pm. Easter Day mass of the Lord’s Resurrection is at 10am. Fr.Peadar Murphy and Fr. Brendan Mallon would like to wish all their Parishioners a very happy Easter.

The present four-year term of  the Aghabullogue Coachford Rylane Community Council draws to a close, the council are preparing for upcoming elections in May. Chairman of the council, Willie Dennehy said “This is an opportunity for every member of our community of 18 years and upwards to participate. This can be achieved firstly by nominating persons from your area who you think might contribute as Community Council members, and secondly by voting on Election Day, May 10 2015.” The Community Council’s aims are to Promote the social, economic, cultural and environmental welfare of the area and to develop a spirit of community, neighbourliness and self-reliance, and foster a sense of responsibility for the current and future needs of the community. The council consists of 17 members democratically elected by the community.  Nomination papers are available in the three locations below over the coming weeks or can be downloaded from the Coachford News website. The nomination papers should be completed and returned by April 17 to Coachford and Rylane Post offices and Cremin’s Shop Aghabullogue.

O Riordan’s Bar claimed the bragging rights in the village and a place in the Muskerry  Darts league semi-final having defeated neighbours Breathnach’s Bar  in the second leg of the Coachford derby in Breathnach’s Bar last weekend. The home team had a 4-3 lead going in the 2nd leg and got off to a fantastic start and won the first two games to open up the gap by three games. Captain of O Riordan’s bar Derry (Geff) O Connell then called a time out to try and rally his team. Whatever he said it had an immediate effect as his team won  the next three games in a row to draw the sides level at 6-6. Breathnachs were clearly rattled but much to their credit they dug in to win the next game and only needed to win the last game for overall victory. O Riordan’s showed huge courage to take the last game to force a sudden death play-off. Paddy Martin (Breathnachs)  was up against local double Glazing installer, John Riordan (O Riordan’s) in the decider and John pounced on  a ‘window’ of opportunity to win the game set and match for what was a memorable night for all involved. The underdogs celebrated well into the night while Breathnach’s were left to lick their wounds and to wonder where it all went wrong. Ger ‘the Cockney’ Carey said “we’re devastated, we knew the lads would come with a good game but after going up 6-3 we were sure we’d win handy. This is a huge blow to us. We now have to endure months of slagging from the boys up the street and there is even talk that a few of our team are already looking to transfer  to O’Riordan’s. Pat O Riordan, team manager of O’Riordan’s Bar was delighted with his team and said, “this was a great victory for us but it was also a great competition between the two pubs and played in a very friendly manner. It shows that when we get together in Coachford and organise events with a bit of imagination customers will come and support them. We now look forward to the semi-final but whatever happens we feel we have won the match of the year and also the biggest prize.”

Aghabullogue GAA are about to embark on another significant development  at their grounds in Coachford. The progressive club will unveil its plans for the construction of an Astroturf Pitch with Floodlights. The 82m x 42m pitch will be located on part of the existing training pitch and the estimated cost of construction is €280,000. Half of the funding for the new facility will be raised from Sport and GAA grants and the balance is being sought from supporters. A €1,000  10 year refundable loan scheme is being launched a the unveiling of the project on next Monday night at the GAA grounds Coachford at 9pm. Everyone is welcome to the launch and to view the ambitious project. The Astroturf pitch is part of the clubs major 10 year investment programme which will also include a state of the art Skills Wall and a 500m walking track around the old pitch. Aghabullogue GAA supports 24 teams at Juvenile level and seven teams at adult level. Aghabullogue GAA have recognised that need to provide additional facilities that can be used from January to December and to also cater for the sporting and recreational demands of the people from the local area. This pitch will be a very important and  welcome facility not just for Coachford but for the parish and wider area

Community Website to promote Coachford and to let those who are away from home know what is happening in the beautiful village of Coachford.
View all posts by coachfordnews →
This entry was posted in Useful Numbers and tagged ACR Community Council, Aghabulllogue GAA, Aghabullogue Coachford Rylane Community Council, Broomhill Vintage Club, Coachford Foróige, Council Elections, Nomination Forms, Separate beds. Bookmark the permalink.