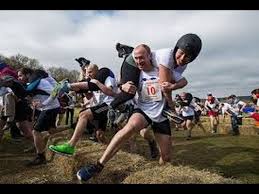 If you are a married woman, small in stature but with a big heart and who wouldn’t mind climbing onto your husband’s or even someone’s else’s husband back, then you are needed in Coachford on August 21st to take part in the ‘Wife Carrying’ contest.. This is the first ever time that such an event is being held at the ever popular Festival and it promises to be one of the highlights of the Sunday’s activities. Wife Carrying is very popular in the Nordic countries and while there has been competitions in various parts of Ireland this is the first time it has been officially tried in Coachford. Apparently there are a variety of ways that the wife can be carried along the race track and it is entirely up to the pair how they go about it.. “ I think it could be great fun as most of the lads around here have trouble carrying themselves  not to mind a wife on their backs. Already you can see some of the lads in the pub eyeing up the women and trying to figure out what the weigh and if they would agree to be their package on Sunday August 21st. It would remind you of Macroom Mart on a Saturday” said local publican, Pat O’ Riordan. All the proceeds of this year’s Festival will go to Marymount Hospice, Suicide Aware and local Charities.

The organisers of the Coachford 5 Mile Road Race are preparing for a big entry into this year;s event. on Friday August 19th. All the proceeds from the 2016 run are going to Marymount Hospice to support the great work that they are doing there and to help fund the Community Palliative Care Service. This year the race is being dragged into the 21st century by introducing Chip Timing. This system will enable accurate results to be produced very quickly after the race and competitors can access these almost immediately. Other additions to this year’s race are expanded categories including First family home and team winners, increased prizes, superb after race refreshments, rub downs available after the run and dressing room and shower facilities available on site. The race is rowing n popularity each year. It is very well stewarded and takes runners from the just outside the village towards the river Lee where the scenery is beautiful and then along some lovely country roads before entering the lovely village of Coachford.

One of the race organisers for the last three years, Olive Loughnane, collected her 2009 World Championship Gold Medal this month and Coachford Autumn Festival,  Community Council and other organisations are going to honour Olive after the race on August 19th.Everyone is invited to come along to celebrate the country’s fourth World Champion in Athletics and get your photograph taken with the Gold Medal.For further information contact 086 80 300 86. 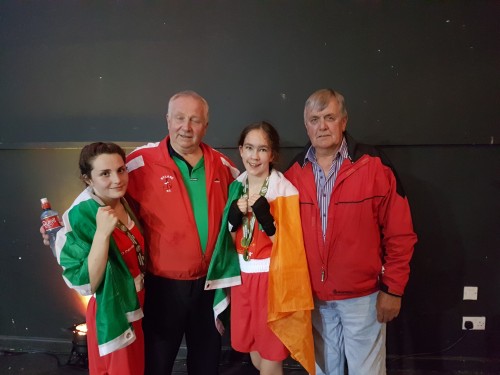 Rylane Boxing club members.Megan Lehane and Linda Desmond won their bouts in last weekend’s first ever Schoolgirls international match between Ireland and England. The tournament ended in a 5-5 draw. The Rylane girls were superb in their fights and coaches Dan Lane and John Barrett were delighted the way the girls fought in this international tournament.

Community Website to promote Coachford and to let those who are away from home know what is happening in the beautiful village of Coachford.
View all posts by coachfordnews →
This entry was posted in Useful Numbers and tagged Coachford 5 mile road race, Coachford Autumn Festival, Coachford Festival, Rylane Boxing, Wife Carrying. Bookmark the permalink.