Lark by the Lee 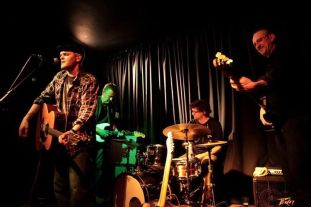 Two summer concerts have just been announced for the grounds of Nadrid House Coachford. The first gig will feature the superb, Ben Reel band and will take place on Saturday July 16th at the riverside house from 8pm. The second concert will take place on Saturday August 13th and the wonderful Black Rose, featuring balladeer and terrific musician, Ronnie Morley will take to the stage at 8pm to entertain the crowds. Admission for each concert at this beautiful and picturesque setting in  the grounds of the historic Nadrid house is only €12 and there will be Beer, wine and soft drinks available on site to purchase. The organisers will also have a BBQ on site for those who might get peckish as the night rolls on. Event manager, Penny Rainbow said “ We had great fun when we ran this two years ago and we are really looking forward to both concerts this year. The gardens here at Nadrid House overlooking the Lee add to the atmosphere and we are encouraging families, groups and friends to come along, bring chairs, rugs and whatever else you like to help you settle in for two great nights of fantastic entertainment” 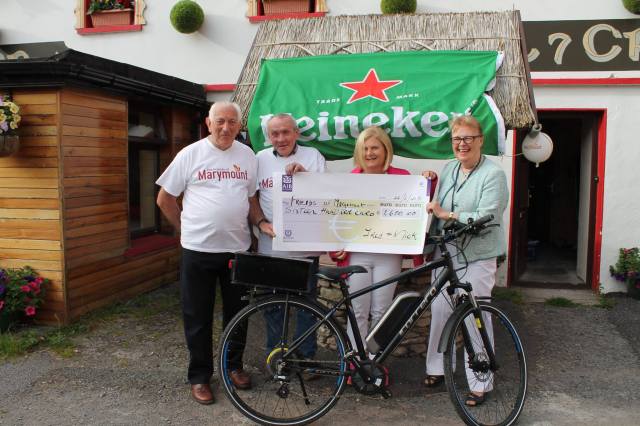 Since both gentlemen are presently not interested in driving they decided to race each other on their electric bikes and in the process raise funds for Marymount Hospice..
The race stared at O’Callaghans bar Coachford and the finishing line was to be Freds Bar Rylane via Aghavrin and Aghabullogue.

Fred got off to a blinding start with his bike on full charge and his super fast legs adding to the speed of his vehicle as he headed for Mullinhassig Waterfall. The race looked to be his although Mick Walsh was not letting him get too far ahead. As they neared the village of Aghabullogue it was necessary for both to make a much deserved and badly wanted pit stop at Cremin’s Bar to check the vehicles, perform safety checks and execute some necessary top ups for the arduous journey onwards towards Rylane.

The last leg of the trip was undocumented for the most part as one of the party in the lead car could not be extracted from Cremins in a timely manner. However as both approached the lovely village of Rylane with crowds lining the route it was plain to see that Mick Walsh was in the lead by about four or five bike lengths with Fred doing everything in his power to try and close the gap but the finish line came too soon for Fred and it was Mick that was declared the first ever winner of the Coachford –  Rylane Electric Classic.

This novel bike race raised €1600 and the cheque presentation took place in Freds Bar, Rylane on Sunday 26th June with music on the night by Deora Ceol.

The ‘Man in Black’ comes to town 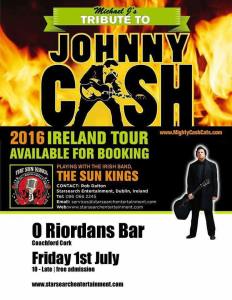 The number one Johnny Cash Tribute artist in the USA  is coming to Ireland for only a handful of gigs around the country and will be appearing at O’Riordan’s Bar Coachford on Friday July 1st. The gig which is totally free also features  he fabulous ‘Sun Kings’ This is a show not to be missed.

The ACR Horses for Schools have announced that their 2016 Race Night raised €4,600 each for Aghabullogue, Coachford and Rylane National Schools. The organisers would liker to thank all those who advertised in the ‘Race Programme’, bought horses, raffle tickets and those that turned up on the the night to support the event.

Coachford is on Festival Footing 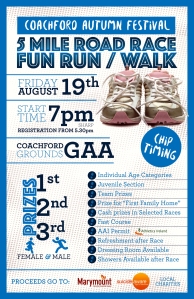 Preparations for the 7th Coachford Autumn Festival are in full swing. The organising committee are putting the calendar of events together and  are confident that this year’s festival will be the best one ever. The  four day event is run by the Broomhill Vintage Club and raises thousands every year for various charities. ‘Something for Everyone’ is the theme of the Mid Cork Festival and that certainly is the case with the 2016 event. Thursday, August 18th will see the first ever junior talent competition. The ‘Rising Stars’ event will bring the best under 18 talent from all over the county together to perform on stage to entertain the audience and impress the judges. Athletes, Runners and  walkers will gather in Coachford on Friday 19th to take part in the 5 Mile Road Race. This  year’s participants will enjoy Chip Timing , increased number of prizes and pre and post rub downs by m

assage therapists along with the usual excellent changing facilities, post race catering and a super organised road race. Registration is from 5.30pm with the race starting at 7pm sharp. Check out the Festival Facebook Page   The main charity for this years festival is Marymount Hospice.

The Aghabullogue Intermediate Footballers advanced to the 3rd round of the Cork intermediate Championship last weekend defeating Adrigole  in round 2B. The boys were under pressure in the first half but pulled away  after half time with John Corkery scoring two goals and Matthew Bradley and Evan o Sullivan adding vital scores at the right time to see the Muskerry boys safely through. The boys now turn their minds to hurling as they get ready to face last year’s junior champions, Dungourney next Saturday at 4pm in Church Road, Blackrock. This will be a tough game for the boys considering the short turnaround from last Saturday’s game and the fact that Aghabullogue have a growing injury crisis. We wish them the very best of luck.

Well done to the Aghabullogue Under 14 footballers who played in this year’s Feile Peil 2016. The boys, although placed in a grade above what they should be in by the organisers, gave a good account of themselves throughout the competition. They battled hard for a victory in every game they played in and never gave up. Many of the lads made friends with boys from Corofin from Co.Clare who stayed in their homes over the weekend.