Posted on November 8, 2014 by coachfordnews

Coachford will lay seige to Rylane this weekend as the two villages come face to face in the AOH cup second round. Both teams play in different league divisions and rarely play against each other in competition but this weekend the AOH Cup brings them head to head on Saturday in Rylane at 2.00pm. Soccer civil war is on the cards as friend faces friend across the North/South divide. Most of the boys play on the same Aghabullogue GAA teams , work together, drink together and have spent years in the same classrooms but this friendship will be put on hold for the 90 minutes of this epic cup clash. Advancement to the next round of the competition is not the only thing at stake on Saturday, bragging rights are also to play for and this will certainly add a bit of spice to the whole event. The boys from the northern side of the parish have been on the rise over the last few seasons and bring great form into this clash however Coachford play in the Premier league and will carry the favourite tags as the day approaches. A large crowd is expected at the venue in Rylane and we all hope that a good sporting game will entertain the supporters from both sides.

Coachford Players embark on a hectic few days of drama beginning tonight in the Cork Arts Theatre Festival where they will perform their festival play, ‘Faint Voices’. The following night the group travel to Cobh to take part in the Haulbowline one act drama festival. On Saturday and Sunday the very busy drama group presents a night of Pub Theatre as they perform three one act plays in Breathnach’s Bar Coachford from 8.00pm. The three short plays; ‘The Script’, ‘A night out’ and ‘Rabbits are no substitute for men’ will feature some new actors and some more experienced ones. A great night’s entertainment is planned and everyone is welcome to come along and enjoy the shows.

The weather was the victor last Saturday as the Minor Football Final  between Aghabullogue and Ballyvourney was postponed and re-fixed for this Sunday, November 9th at 2.00pm in the Sports grounds at  the Cork Institute of Technology. The boys will face stiff opposition from Ballyvourney and will have to be at their very best if they hope to overcome the challenge from the boys from the Gaeltacht. 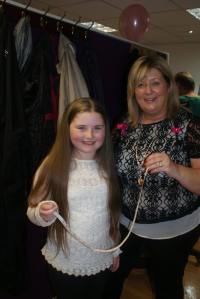 Congratulations to Molly Mangan from Rylane who stuck to her promise of getting her beautiful hair cut up short for charity. The 9yr old donated her 22 inch pony tail to the Rapunzel Foundation so that it  could be used to make wigs for children who suffer hair loss as a result of medical conditions or treatment. Molly also raised some much needed funds for the charity though sponsorship cards. Maria O’Donoghue from Styles Hair Salon in Coachford cut Molly’s hair and gave the little girl a fabulous new hairstyle that she can be very proud of. The salon pulled out all the stops last weekend and created a party atmosphere for all of Molly’s friends and family who came along to support her.

Chairperson of Coachford Community Association, Deirdre O’Donovan presents Tommy Lawton of the Inniscarra Lake Tourism Development with a plaque as a token of the communities appreciation for his work on the Coachford Greenway

The Minister for state for Foreign Affairs, Mr Sean Sherlock TD performed the official opening of the Coachford Greenway last Friday. Also present at the opening of this fantastic amenity were the Mayor of the County of Cork, Cllr Alan Coleman, Blarney native, Mr Jerry O’Sullivan Deputy Chief Executive of ESB and Olive Loughnane Olympian and World Silver Medallist. The Coachford Greenway is the final product of a two year long project to develop a multi purpose amenity  by Inniscarra Lake Tourism Development Limited in association with the National Coarse Fishing Federation of Ireland and in Partnership with the ESB, Inland Fisheries Ireland and Cork County Council. The project was funded by a grant from Avondhu Blackwater Partnership, along with Cork County Council,  Inland Fisheries Ireland,  the Coop Fund and the National Countryside Recreation Strategy as well as fundraisers from the local community in Coachford and the surrounding area.

The project, a huge investment for the region, has provided a 2.8km linear park in the form of a walkway, now available for everyone to enjoy;  walking, jogging, rowing spectators, family days out, picnics and fishing.

In July 2014 The National Coarse fishing Federation of Ireland hosted the 4th World Feeder Fishing Championships on Innicasrra Lake and welcomed teams from 25 different nations onto the Coachford Greenway.  The event was an over whelming success bringing much welcomed revenue during the championships which showcased the magnificent facility to anglers Worldwide.