Posted on November 1, 2013 by coachfordnews

The setting up of a Foróige club for the Coachford area takes a step nearer this weekend as training for its leaders will begin on Friday, November 1st at the Community House, Coachford at 8pm. It is hoped that once the leaders are trained that the Foróige club can have its first meeting before the end of November. If you are over 21 and would like to become a Leader you are more than welcome to join the training in Coachford on November 1st.

Emma  won gold in points, continuous, full contact and team Sparring (a first for any Irish competitor). This is a huge achievement for Emma and Shannon. The world championships are very competitive and see the best young kickboxers in the world compete against each other. For Coachford to have two athletes competing at this level is something the whole community is very proud of.

Resurfacing of Village is completed

Cork County Council have completed the resurfacing of Coachford village and the relining of the main street. This has made a huge difference to the appearance of the village. The Community Council are still working with the council to ensure that the improvements to the road from Coachford to Peake is a priority for 2014. 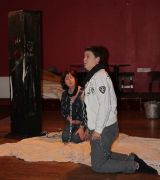 Congratulations to Coachford Players who picked up the John Brazill Memorial Award at the Kilmallock one Act Drama Festival. The group came third in the confined section and were awarded the prize for their innovative and brave production of ‘Nine’. The group’s next competitions are in Cork and Haulbowline on Friday November 8th.

The Mid Cork School defeated reigning champions Ballincollig’s  Coláiste Choilm by 2.12 to 0.03.  Coachford’s victory was all the more impressive for their apparent strength in depth with many of those introduced were keen to impress for their next outing, the Munster Senior A quarter final against a fancied Laurel Hill side from Limerick city. Coachford have also qualified for the Senior league semi final and await the result of the St. Joseph’s Doon v Gort tie.

Killanardrish/Coachford Under 13s and under 14s enjoyed two good victories in their leagues over the weekend. The under 13s defeated Avondale 5-1 and the under 14s were 4-1 victors over Blarney.This weekend, the Under 13s play Tramore away on Saturday morning while on Sunday the under 14s host Carrigaline.

Coachford AFC play Leeside in the 3rd round of the FAI junior cup this Friday at 7.30pm in Mayfield. The B team play Waterloo in the league on Saturday.