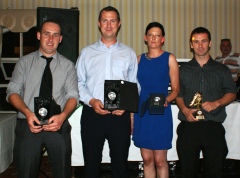 Coachford Celebrate Victory
Coachford AFC visited Blarney on Saturday night not to play a pre season friendly but to celebrate their historic Premier League victory. The players, officials and supporters all gathered in the Blarney Castle Hotel to honour the premier team and the outstanding players and club officials for the 2012/13 season.
As the fabulous meal ended, Club Chairman, Joe Ronan addressed the audience and praised all those responsible for the very successful season the club enjoyed during the last twelve months. He thanked the coaches of the two senior teams, the former chairman, Thady Delaney and all those responsible for keeping the three pitches in superb condition during the playing season. He had a special word of thanks for the club’s sponsors, O’Callaghan’s Bar for their tremendous support all year.
The division two team manager, John O’Sullivan thanked his players for the hard work they put in during the year and presented Joe Ronan the ‘Player of the Year’ award. The Premier team manager, Michael Walsh then presented his team players their winners medals and spoke on each and every player and what each of them brought to the team during the year. The Premier team ‘Player of the Year’ award went to goalkeeper Peter O Riordan and was a very popular choice as he received a standing ovation from his team mates as he accepted the award. The ‘Golden Boot’ award went to Alan Jeffers for the 34 goals he scored during the season. Michael also paid tribute to his back room team of Donal Moynihan, Maurice Kenneally and Shane ‘Scary’ O’ Leary for their hard work throughout the season. He stressed that this success would not have been possible without the input of the entire panel and the help of the club, especially Thady Delaney and Danny Boy O’Connell. Finishing up he added that this victory social should be an annual event and he and his coaches and players would work hard in retaining the Premier League title.
Club person of the year went to the wonderful Olive O’ Sullivan for her tireless work behind the scenes all year and for the way she is bringing on the next generation of players for the club as she coaches the under 8’s and under 10’s.
Everyone present went on to have a great night celebrating the past season and the coaches were seen planning for the next 2013/14 campaign.

I’ll get the shots in

I’m drinking with the sponsor

No, I can’t see anything in your ear

There is no doubt that I deserve this award

Thanks Scary, without you I would be nothing

34 goals and I was injured for a few games

would someone tuck in his shirt

The future is in good hands

No one is cooler than me

I have no idea what she is doing with me

How come i’m so fecking handsome

Me and my best friend – the mirror

I just think Danny could be a great manager Thady

Scary looks the least scary of these three

How come we look this good – all the time