Posted on October 4, 2012 by coachfordnews 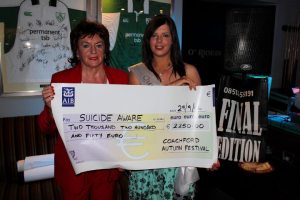 Congratulations to Shannon Murphy and Emma Flanagan from Coachford who both won gold in the World Kick Boxing Championships in the USA last Friday. This was a huge achievement for the girls and for the Coachford club. Shannon won an amazing two gold medals at the competition in Florida last week. She picked up the first of her medals in the ‘Full Contact’ grade and the second in ‘Tul’. Emma won her gold in ‘Close Contact’ . Both girls also won silver medals in other grades. Emma’s Mother, Kathleen Flanagan won a silver medal at the championships in the veterans -60kg sparring. Kathleen fought a great semi final but was unable to fight the final due to a rib injury.

Broomhill Vintage Club donated over €5,000 to Suicide Aware and local charities last weekend. The cheques were presented to the groups at a function last weekend. €2,250 was presented to Pat Behan of Suicide Aware who thanked all involved with the festival and said “That now, more than ever help is needed for so many more people who are going through a tough time. I would appeal to everyone to look out for the signs of depression and suicidal tendencies. People who die by suicide tend to suffer from anxiety or depression, symptoms of which may include loss of interest in activities, hopelessness, and short or long term thoughts of doom and gloom. Thoughts of suicide are not rational and talking through the issues can give them time to see and work through their difficulties and avoid any impulsive actions. Don’t be afraid to discuss suicide – asking about it won’t put the idea in someone’s head”. Cheques of €1,000 each were presented to Coachford Care of the Aged, Coachord Branch of St. Vincent de Paul and Coachford Tidy Towns. Pat O’Riordan, PRO of the Broomhill Vintage Club said, “We are absolutely delighted to be in a position to help out all of these groups who are doing wonderful work in our community. Since our first festival three years ago Broomhill Vintage club has donated over €14,000 to charity.”

Well done to Coachford AFC A team who defeated Buttevant A in the Munster Junior Cup 1st round by 3 goals to one last Friday night. The A team have been draws against Glen Celtic in the next round. The B team lost to Los Zarcos by a goal to nil on Saturday afternoon in the league. Next Saturday both teams are involved in the 2nd round of the AOH Cup. Coachford A play Knockavilla in the Glebe at 3.00pm while the B team take on Springfield in Carrigadrohid at the same time. Killanardrish/Coachford take on Bandon in the Under 12 league on Saturday at 1.15pm.

There was no winner of the soccer Lotto this week. The numbers drawn were. 7, 24 and 27 . The lucky dip winners were Johnny Sheehan, Dan Cooney, Margaret O Riordan, Paddy O Riordan and Peg O’Riordan. Next Week’s jackpot will be €1,700 and the draw takes place in Hogan’s Bar