The draw for the first ever Coachford Community Association 50/50 raffle took place on Monday night and as promised there was a winner. Batty O Donoghue from the Model Village in Dripsey was the first name out of the hat and won 50% of the total pot. €402 was the total pot and Batty walks away with a very nice sum of €201. Tickets are already on sale for the August draw which will take place on Thursday August 31st

The Coachford Greenway has reopened after the refurbishment works and is again available for public use. This wonderful and popular amenity is used by hundreds every day . The new surface is very welcome by walkers and runners as regular and new users return to the riverside walk.  The committee would like to thank everyone for their patience and good will during the recent closure and hope they will continue to enjoy and derive pleasure from the amenity.

Fourteen countries including Spain, Italy, France and England will descend on the village of Coachford next week as the World Youth Angling Championships take place on Inniscarra Lake. The Competition takes place on Saturday 12th and Sunday 13th with the teams expected to start arriving from this weekend for training and familiarisation of the venue. Each competing country will have 15 team members, five under 15s, five under 20s and five under 25s. Accommodation in the Lee Valley area is at a premium with Hotels, B&Bs and holiday apartments all booked out for months. Coachford Village is the venue for the official opening ceremony on Thursday August 10th and a parade of flags by the competing nations will take place at 6pm. The village is expected to be hive of activity for the week as the GAA hall will act as the official Head Quarters of the World Championships. The Under 20s and U25s will fish on  the newly refurbished Greenway while the   for the Under 15s takes place on the Garden Section of the river at Griffins Garden Centre in Dripsey. “The whole community is looking forward to welcoming the young anglers to the village and with 210 young fishermen, their families and team members coming to Coachford it is going to be a great week for the area. We are thrilled that the Inniscarra Lake Tourism Development Committee and  the National Course Fishing Federation of Ireland were able to secure another World Championship for the river so soon after the very successful World Feeder Championships in 2014. The improvement works on the Greenway will see this already excellent facility become an even better venue for top class world events in the future. “ said Community Council Chairperson, Maighread Ní Mhurchú. The national flags of the fourteen nations have been installed at Rooves Bridge by O’Donovan Engineering and provide a terrific backdrop to the world championship venue. The village has been decorated with buntings and flags also as Coachford prepares to be invaded.

The organisers of the World Youth Fishing Champi0onships are looking for river bank stewards to help out on Saturday and Sunday, August 12th & 13th. Each of the 210 competitors will need a steward to count the number of fish they catch and to act as support to the angler. This is a great opportunity to get involved in a world Championship event and to enjoy a few hours on the river bank.If you are available on any of the days please contact Tommy on 086 104 3040 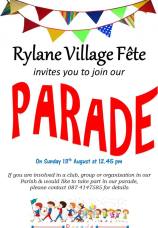 Rylane Village Féte is coming up on August 13th and there is loads on to entertain everyone. Giant Foozeball, ‘Paws on Parade’ dog show ,  Donkey Dung Lotto, Tractor Building, ,Food & Craft stalls, Village entertainment, The most Stylish Lady and Gent competition and The Féte Parade. Admission is free and all are welcome. Funds raised will go to Rylane Community Park Association. 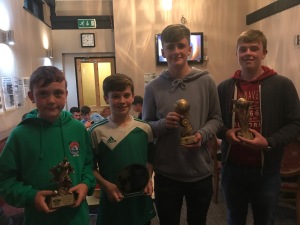 Well done to all involved in the awards night for Killanardrish/Coachford Schoolboys. Medals were presented to the victorious U15s. James Lane received an award in recognition of his involvement in the Cork Schoolboys squad. Callum Hill was 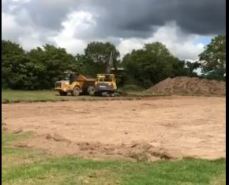 ed on the new Astro Turf pitch at the Aghabullogue GAA grounds in Coachford. This new development by the Football & hurling club will be a very welcome addition to the wonderful facilities at the club. The work is expected to take around three months and will be open for bookings in the very near future. The new pitch will be floodlit and will be used by the GAA for winter training and juvenile matches. It will also be available for other clubs to hire.